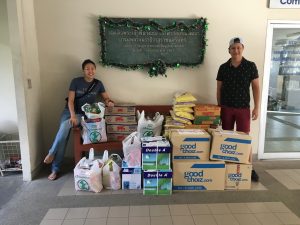 Thanks to our aid advisor to Thailand, Lisa Tran, and our ambassador Yui Yud, ATG was able to make a small disbursement of $550 in aid over the Christmas holidays to The Mercy Center, which is located in central Bangkok, Thailand in an area called Klong Toey, an area which is synonymous to the large slum community that lives here. According to a report done by Borgen magazine in 2014, the area is “one of the country’s 5,500 slum communities, covers an area of around a square mile and is home to around 100,000 people.” (http://www.borgenmagazine.com/bangkoks-klong-toey-slum/)

“Around 20 percent of Bangkok’s residents live in illegal squatter settlements all around the city. Dating back from the 1950s, Klong Toey is one of the country’s oldest and most well-known slums. Many inhabitants of Klong Toey originate from the country’s poorer northeast who have been attracted by the work opportunities of the district’s river port, Bangkok’s largest wet market, the business district as well as the oil refineries in nearby districts. Aside from poverty, drug addiction is a very pressing problem among the slum’s youth. Methamphetamine and crystal methamphetamine are the two most common hard drugs. Furthermore, basic amenities such as water and electricity are always in short supply.

In Klong Toey, an average household earns only around half of the national average and only around one-third of the income an average Bangkok household. Moreover, the living condition within the slum is also truly appalling. Against the backdrop of the intense and humid tropical heat of over-urbanized Bangkok accompanied with the putrefying odor of the city’s sewage system, the residents of Klong Toey experience murders, abuse, petty and serious crimes, drug addictions, unmanaged waste, unemployment and grinding poverty on a regular basis. Garbage and undrained sewage clogging litter the slum community and elderly and people with disabilities sitting in front of their makeshift tin shack houses.

As many inhabitants lack the skills and the recognized qualifications necessary to achieve social mobility, breaking away from the vicious cycle of poverty is incredibly difficult. To make matters worse, in Thailand—one of the global centers of human trafficking and sex trade—many residents of Klong Toey find their livelihood in the informal sector, some of which are illicit.

In Thailand, it is estimated that a third of the country’s working age population work in the informal sector, an umbrella category that includes everything from black market illegal businesses to selling garlands and street food.This means that a large part of country’s working population do not have any retirement plans, health insurance or any other social benefits. It is also estimated that 2.5 million children in Thailand are absent from school. Certainly social welfare and human development concerns are among the some of the most pressing issues of the country. Nevertheless, with Thailand’s “larger” political and economic problems, these “smaller” issues are hardly discussed and many urbanites are unaware of their existence.”

We work to help the children and communities of the many slums of Bangkok. Together with our neighbors in the slums we create simple-but-progressive solutions that touch the lives of thousands of the poor every day. We build and operate schools, improve family health and welfare, protect street children’s rights, combat the AIDS crisis, respond to daily emergencies, and offer shelter to orphans, to street children, and to children and adults with AIDS – always together, hand in hand and heart to heart with the people we serve.

As reported by Yui Yud: “After a number of phone calls with the staff at the Mercy Center, I found them to be very dedicated in their mission to help promote education to unfortunate children. They have set up their main office/home in the center of the Klong Toey slums which provides a home to around 200 children aged 3-18. This center also has a significant education center, with many classrooms, an art room, computer room, nursing station and a cafeteria. The education facility is provided for the children that live in the home, as well as other slum kids in the area whom are unable to afford outside education. Apart from the center at this location, they have up to 23 centers around the country which provide basic education for up to 3000 children between the age of 2-6. Many of the children whom come to their schools are not orphans, but families whom can’t afford education. Another interesting program they have is called Construction Camp. The concept is like a mobile school van which visits children at construction sites. Generally, these are migrant families from Cambodia and Myanmar whom come to find more income and bring their children along. Rather than having the children run around the construction sites all day, these vans visit the sites with teachers and provide the kids with some learning tools for the day. There are currently 9 camps at the moment.” 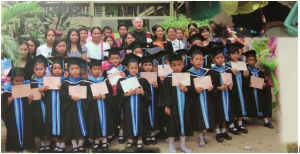 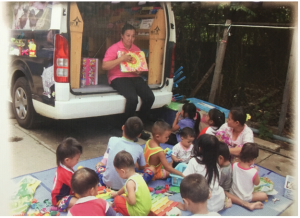 There are also many other programs that are run by the Mercy Center:

Thank you to Lisa, Yui and to you for your generous donations so we can continue this important work. Please continue to donate to our cause here. 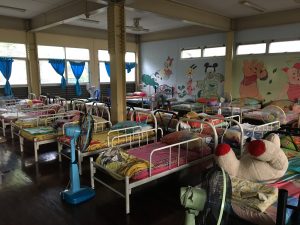 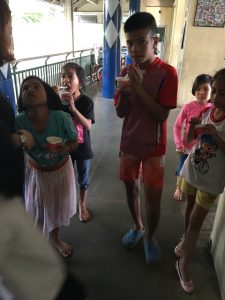