I think “Going Against The Grain” means grabbing hold of your passion and standing firm in your vision, even in spite of hurdles and detractors. It means pursuing the most authentic version of yourself.

In some ways, it doesn’t feel like I “decided” anything. I was just doing something I really loved, realized that it empowered me to have a voice and connected meaningfully with a community. Along the way, I’ve been fortunate enough to build a reputation of sorts, which gave way to more opportunities. I’m happy with calling it a career, because at this point, I can’t imagine myself doing anything else — and that’s a good thing.

It never stops. You cannot rest on your laurels. You have to keep working and growing and grinding. How badly do you want this? How hard are you willing to fight for it? It’s a question I ask and answer every day.

Honestly, above any of the things that I’ve written, or any of the attention or accolades I’ve received, the most rewarding aspects of my career are the relationships. The most important and valuable resource, from the very beginning, has been my community. The longer I’ve been at this, it becomes more and more apparent. When I take a moment and look at my community, and I’m just grateful for the people that have my back.

Keep working and building and maintaining my blog, I guess. As long as people read it, I’ll keep doing it. I’d also love to expand into other media, as I’ve started to do. I co-host a talk show called “Angry Asian America” on YouTube, and I host an audio podcast called “Sound and Fury” that I’m very proud of. Also, somewhere in my future is a book, maybe. Hopefully.

“To hell with circumstances. I create opportunities.” – Bruce Lee

The grain ain’t me. 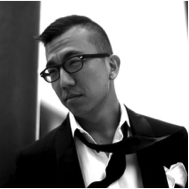 From being nominated as one of the “Top 10 Youth Marketers” to the “10 Most Eligible Men of Dallas” or TV Co-Host of The Weekend Insider, Ben Smithee is known for making an impact. He started his first consultancy, SPYCH, in 2009 and grew it to become one of the most respected and innovative Marketing Insights and Strategic Consulting firms in the industry. His expertise in digital marketing and the Millennial consumer propelled Ben and the SPYCH team to consult some of the world’s biggest brands, such as Coca-Cola, Del Monte, General Mills, Sterling Jewelers, ACS, GEICO, McDonald’s, Kroger, Ebay, to name a few.

In 2014, Smithee exited SPYCH and moved to New York to parlay his industry expertise and help start RELEVENTS, a game-changing business events and education company. As Chief Strategy Officer, he is helping to create a platform for a new era of business exchange and experiential education.

Smithee, a Korean adoptee, has been a featured keynote speaker and sought-after consultant, spanning six continents and almost 20 countries. Regularly interviewed by leading publications and media on the topic of the future of marketing, the future consumer and entrepreneurship, Smithee possesses a passion for life, business and people that is insatiable and an energy that is infectious. Outside the office, Smithee enjoys golf and supporting organizations such as The Warren Center, which provides support to families with children who have developmental delays.

“Going Against The Grain” means shattering stereotypes and following your passion. Nothing in life worth doing comes easy. Whether it is relationships or business, life needs more outliers that are willing to commit to their dreams.

Entrepreneurship really chose me. From the time I was in Jr High and High School I was coming up with business ideas, and the world of Marketing kind of grabbed me when I hit college.

I feel like many of my biggest challenges have not been a result of being an Asian American. Growing up being adopted really ingrained diversity into my life and forced me to focus on things beyond racial or cultural barriers. I feel like it was a tremendous advantage and provided a great deal of empathy. I will admit there needs to be many more Asian American entrepreneurs out there!!

I feel growing my first company, SPYCH, to become very well-recognized and respected and working with the clients we developed was something I could have never dreamed of achieving. But, honestly, the biggest accomplishment was my ability to put it all aside during my Dad’s last days in his battle with cancer. It proved that while others always saw me in the light of business and the “addicted to work” mentality, family really maintained its number one position. It really showed me that choosing family first and relationships always ends up to be the right choice.

I recently launched The Smithee Group, and am ready to grow another consultancy. We are focusing on Digital Marketing Strategy and Brand Development, and will obviously leverage our pedigree in insights and intelligence. We also have an amazing event – Innovate @TBD FEST coming up for RELEVENTS!

“Skills are coachable, Behaviors are trainable, Personalities are unchangeable.”

Helping young professionals find their way. Helping The Warren Center – a phenomenal organization in Dallas that helps families that have children with developmental delays.

Tex-Mex – especially now that it is hard to come by living in NY.

Everyone Deserves a Chance to Experience Their Passion.