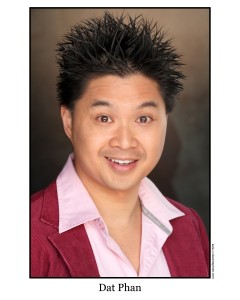 Dat Phan is the Original Winner of NBC’s “Last Comic Standing” and is a Headlining
Comedian touring live across the U.S. He has made numerous TV and movie appearances,
including “The Tonight Show with Jay Leno,” “The Family Guy” voiceover, and “Cellular.”
Most recently Dat has appeared on “The Tyra Banks Show” discussing racial diversity.

Dat Phan was born in Saigon, Vietnam and immigrated with his mother to San Diego,
CA. He suffered through financial hardships most of his childhood. After 9/11, he realized life
was short and decided to go for his dream to pursue comedy full time. Moving to LA he had to
live out of his car and even after being robbed at gunpoint, he wouldn’t stop pursuing his dream.

Dat answered phones for The Improv in Hollywood during the day and tried to get as much stage time as possible at night; this meant he often went on well after midnight when crowds were often more drunk than coherent. Later, Dat took the risk and auditioned for the experimental, comedy based show produced by NBC that would launch his career. The rest is history as he was named the funniest person in America on August 5, 2003.

Dat’s culturally insightful comedy inspects ridiculous stereotypes, and shares his
experience of being a regular American guy with a Vietnamese heritage. His youthful energy
and truly unique life experiences, including all the tough times, are combined to create the
message of living your dreams and reaching out for the stars. Dat Phan’s mission is to bring a
more positive portrayal of Asian-Americans to mainstream entertainment and Hollywood. “We
want to be seen as more than just martial artists, or bad stereotype token roles in American TV & Movies.”

Dat Phan has been included in The Smithsonian Institution’s exhibition of The Top 10
Most Influential Vietnamese-American Individuals. The DVD “Dat Phan Live” was released in
January 2010 and is available from Amazon.com. Dat’s latest CD, “You Touch, You Buy“ is
now available on iTunes.

Knowing who you are and taking risks.

What made you decide to pursue a career in comedy/entertainment industry?

I went through a breakup with a girlfriend and the ex-girlfriend’s mom suggested I go to college. So, I enrolled in classes and took a required speech class. I realized that most of my speeches made people laugh. After that I started performing at the La Jolla Comedy Store and then was forced to hone my craft at small coffee shops in San Diego, CA.

Being voted into the Smithsonian’s Top 10 Most Influential Vietnamese in the world. Usually the list is full of doctors, lawyers, scientists, Nobel Peace prize winners. It’s an honor to be a performer and on that list.

I just finished a showcase program with CBS Diversity which will help me become more active in film and I have a pretty crazy tour schedule for 2012.

Quote to live by: “If you fail to prepare, you are preparing to fail.”

Can’t live without: My iPhone