When I was a young child, I always looked forward to Autumn.  It was not because I enjoyed the beautiful scenery of the Fall, but because of the Mid-Autumn Festival (Tết Trung Thu) or sometimes also called Children Festival.  During this time, my parents always invited the children from the poor families in our neighborhood to our house to celebrate the festival with us.  Our house had a very large front yard (about an acre) surrounded by coconut trees.  With 40-50 rowdy- exciting children, we made so much noise that seemed to shake down every single coconut from the tree.  My parents served us Moon Cakes, then gave each of us a lantern made out of colorful paper.  We lit up the lanterns then walked around the yard in formations, with my oldest brother leading the bunch, in what we called the marching game.  We sang the children songs as we marched.    Sometimes we walked in circles, then my brother suddenly broke the pattern and switched into the figure eight, a triangle, or a star.  If any of us didn’t follow the person in front of us fast enough, the shape of the parade was broken and we all got confused.  But then we tried to chase the person in front of us so that we could get back in a pattern again.  The game was simple like that, but we had so much fun and laughed so hard.  I remember that the children from our neighborhood always told me that they appreciated the opportunity and could not wait until the next year.

Many years have since passed.  I now have grandchildren of my own, but the memory of the children’s laughter at our celebration always come back when the Mid-Autumn Festival is near.

During the last several years, ATG has sent aid to the orphanages in Vietnam to support the children.  We go back to Hue and Danang every year to visit these orphanages and to identify their needs.  As ATG was able to generate additional funds, we increased and expanded our supports to other orphanages and children programs as our resources allowed.

This year was no different than the prior ones.  I called PT, the Director of Uu Dam to plan out the celebration.  PT told me that besides the children of Uu Dam, there are so many children from extremely poor families in the neighborhood, but PT could not take them all into Uu Dam.  Most of these children are either without fathers, mothers, or both, but still live with relatives who are also very poor.  PT organized for volunteers to provide the children with entertainment, while ATG helped with treats, and supplies.  PT indicated that there were children who walk to school without shoes.  Thus, we asked her to help buy fifty pairs of sandals to give to the kids on the day of celebration.  The celebration was a success!  PT later indicated in her heartfelt letter that the children had so much joy and were encouraged.

For only VND$10 Million, we were able to bring happiness to approximately 300 children. 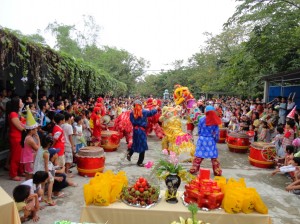 They got to see the Dragon dance, sang children’s songs, received and enjoyed the treats. 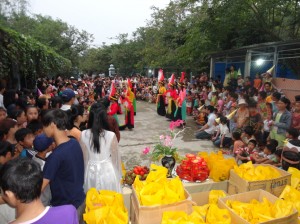 Our volunteers purchased treats and packed them to be distributed to 67 children of both of these centers.  We spent in the total of VDN$3,160,8998 and purchased treats for them.  It was raining cats and dogs in Danang on the day of celebration, but our volunteers braved the winds and rains and delivered the goodies to the children. 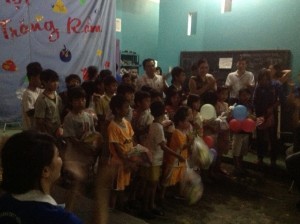 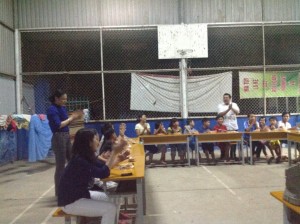 Though there was no Dragon dance, the treats and songs brought smiles to the children’s faces…

One child came and told our volunteer that he promised us that his friends and he will be good and hoped that we will come back again.  Of course, we will!  How can we forget those smiles and the sparkling eyes?

It doesn’t take much to make these children happy or give them hope.  Just a few bags of candies and cookies, or a new pair of plastic sandal helped them cheered with joy.  As PT said in her letter, “We appreciate ATG family very much!  During the many years, ATG has always been walking side-by-side with Uu Dam in the mission to care for the lives of the orphans of Uu Dam.  You have also followed each step of the way for the less fortunate children of Uu Dam, and helped them stepped in to life with confidence.  This time, you also extended your arms and helped PT to reach out to the other even less fortunate children outside Uu Dam, and brought them a little joy and hope during the Festival for the children at such tender ages….Your concern and thoughtfulness during this occasion have just added the needed fuel to the “camp fire” to make the Mid-Autumn Festival for Uu Dam more warm and celebrated!”

Scholarships for orphans and students from disadvantaged families in Danang:

Encouraged by the facts that eight children from Uu Dam orphanage were able to pass the entrance exams to the local universities,  ATG’s board approved and allocated additional funds to help the good students who are either orphans and/or in the less fortunate situations to have the means to continue their educations.  Our volunteers worked with local school boards and teachers and helped select 14 out of 155 children from the NTH school to give them scholarships.  The candidates were selected on the basis of needs (orphan and/or from families with unstable or no income) with recommendation from their teachers and school board for academic achievements.   We awarded these children with VND$30 Million, given twice during the school year.  The first one in the Fall, and the second one in the Spring.  Each student received VND$1 Million each time to help pay for books and school supplies. An exception was given to one kid who lost both parents and has to live with an aunt who is also very poor. She received VND$2 Million.

We also worked with SPC and the NH school district in Danang and identified 20 students who are orphans or from extremely disadvantaged families.  The scholarship given to these students were in the form of a new bicycle for each of them, because they live far away from school and have to go to school by foot.  We were told that they had to spend 30 minutes or more each way to walk to school.  Some of them have to help their mother to sell food early in the morning before school, thus often running to school or were late.  We hope that with these bicycles, the children will have more time to study.  They were also selected on the basis of family situation, need, and academic achievement.

Needless to say, the children were shocked and overjoyed with the generous gifts from ATG.  They all promised to ATG, via our volunteer, that they will study hard and will try to become good individuals and contributors in the future. 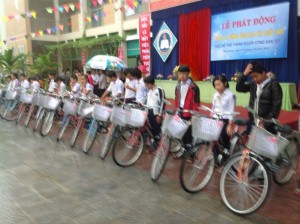 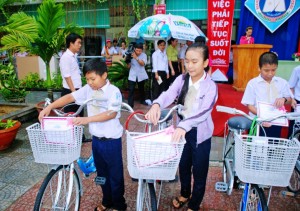 I hope that our ATG group will try to continue with this tradition and help the children from the disadvantaged families celebrate the Mid-Autumn (or sometimes called Harvest Moon or Children Festival).  I also hope that we can reach out to the less fortunate children, not just in Danang and Hue, and not just in Vietnam, but wherever our volunteers can get to the location, and help them smile and excel.

I hope that my letter and pictures will help you smile too!