DALLAS, TX – Dallas nonprofit ATG Against The Grain Productions announced the winners of their first ever Artistic Scholarship as Texas students Monika Hoang and Dorcas Leung. This year’s Against The Grain Artistic Scholarship is sponsored by Hotels.com and is given to an outstanding Asian American high school senior or college student pursuing a degree in the performing and/or visual arts and who represents the spirit of the organization’s going “against the grain” mantra. Both Hoang and Leung will each be awarded a $1,000 scholarship for their exceptional artistic ability, talent, community involvement, leadership and academics.

ATG Founder/President Tammy Nguyen Lee is proud of these two exemplary students who set a precedent for the standards that ATG values. Lee said, “We created this scholarship as an extension of what our organization is already doing to promote and support Asian Americans in the arts, and we hope that this scholarship continues to cultivate those in our community who are finding unique ways to express themselves and create stories for us to share.” She continued, “We look forward to seeing how these two students will grow in their profession and see just how they will find a way to give back.” Lily Yang, ATG’s Director of Community Outreach, spearheaded the review process for the ATG Artistic Scholarship and highlights the principles of the fund. “The scholarship embodies ATG’s mission of promoting awareness of art in all media and a commitment to the community. The scholarship program is not limited to only financial assistance, but also provides the winner with mentorship, exposure and a support group both within and outside of the art community.” She says she hopes that the scholarship will be a catalyst that will propel winners to greater heights.

Monika Hoang is a junior at Southern Methodist University in Dallas, TX and is majoring in creative advertising. She was recently awarded top honors as Best Art Director for her portfolio class and was chosen to participate in the elite One Show Student Exhibition in New York City. In response to winning the ATG Artistic Scholarship, Hoang said, “Receiving this scholarship shows me that support for the arts is out there in the community.” She said that the scholarship gives hope to others who are hesitant in pursuing arts. “This scholarship is like a gentle nudge and whisper telling me to keep doing what I love.”

Dorcas Leung, a senior at Stratford High School in Houston, Texas, recently graduated at the top of her class. There, she starred in and participated in nine different theatre productions. She was nominated twice for the Tommy Tune Awards’ Best Featured Performer. She is skilled in ballet, jazz, modern, tap, musical theatre and piano. She was one of twelve students accepted into the Weitzenhoffer School of Musical Theatre at the University of Oklahoma, where she will begin her college career this fall. “Getting the ATG scholarship makes me feel very blessed. It is hard enough already to be an Asian American in a difficult field of study, but I feel that with this scholarship I could be an encourager to other Asian Americans wanting to pursue a career in the arts,” Leung said. “I am very happy to be a representative of this scholarship, and I know it holds a lot of weight, because I want to be a good example of ‘Going Against The Grain’ and prove that I can do what I want to do, even if it is difficult.”

Both scholarship winners will attend ATG’s 3rd annual Fashion for a Passion charity event, held on Saturday, October 1, 2011 at Studios 1019 in Dallas, TX, where they will be presented with their scholarship, as well as showcase their talent amongst other Asian American artists. Hoang’s artwork will be on display, while will Leung perform a vocal medley. 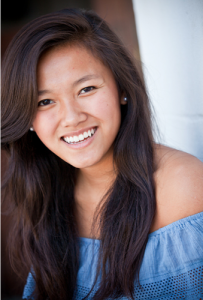 Dorcas Leung recently graduated high school at the top of her class, during which she starred and participated in nine different theatre productions.  She is actively involved in a variety of extra-curricular activities, including planning and hosting school functions through student council, performing as part of an improvisational comedy troop, and helping organize theatre activities for children as part of her local thespian society.

She was nominated for the Tommy Tune Awards’ Best Featured Performer twice.  She is skilled in ballet, jazz, modern, tap, musical theatre and piano and will begin her college career studying musical theatre at the University of Oklahoma.

What does getting this scholarship mean to you?

Getting the ATG scholarship makes me feel very blessed. It is hard enough already to be an Asian American in a difficult field of study, but I feel that with this scholarship I could be an encourager to other Asian Americans wanting to pursue a career in the arts. I am very happy to be a representative of this scholarship, and I know it holds a lot of weight because I want to be a good example of “Going Against The Grain” and proving that I can do what I want to do, even if it is difficult.

To “Go Against The Grain” means to defy the norm. To me, I think it means to continue doing what I love and am passionate about, even if it’s not something that is always approved of or smiled upon.

What made you decide to pursue a career in the arts?

I first started doing theatre arts in middle school as a hobby but the more I was involved in productions, the more I loved the thrill of being on stage and performing. I think theatre is the most unique form of communication because with each production and each show, the actors are telling a story. It may not be your own story but somehow in a show, the message and thoughts of others are being communicated. I decided to pursue a career in the arts because I love how unique but direct communication is shown in theatre.

What have been some of the challenges you faced/lessons you learned as an Asian American student going into this field?

Physically, it is hard to be a musical theatre major because most shows are written as other races. It is a challenge because although I love to perform, I may not always get the right opportunity to. It’s not that I believe that I am not capable of doing certain roles, but the truth is,  the roles were not written for my personality/character as an Asian American. Although this is difficult, I cannot change and would not change who I am.

My biggest accomplishment, I think, is that I have convinced my parents to support me in my decision to major in the arts. It is hard and against the norm for an Asian American girl to have the passion to do theatre full time. At first, my parents were hesitant and saw my love for theatre just as a hobby that would pass. But now at this age, I am very blessed to be able to have my parents by my side and supportive of my decisions.

What can we expect to see from you in the future?

Hopefully, in the future I can use my decision to major in theatre to write, communicate, and show the need for Asian Americans to express themselves through art. By winning this scholarship, I am more than happy to represent “Against the Grain Productions” because I believe that my choices for majoring in theatre are most definitely going “against the grain.”