DALLAS, TX – Dallas-based non-profit ATG Against The Grain Production’s upcoming annual charity event Fashion for a Passion has become known not only for the exciting runway show, but also as an event where guests can enjoy and even bid to own emerging Asian American art.  This year’s Exhibiting Artists are an eclectic group that include graphic artist Ha Mai aka “Fur Face Boy,” 17 year-old fashion photographer Ann He, recent  SMU MFA Meadows graduate Anh-Thuy Nguyen, Tam Nguyen (brother of designer Khanh Nguyen of Nha Khanh),  ATG Artistic Scholarship Winner Thoa Nguyen and Artistic Scholarship Finalist Melissa Woodbridge. Each artist will exhibit a piece as well as donate a piece of their original work in the silent auction. This exhibition, along with musical performances and a runway show, takes place at the Dallas Contemporary at the Dallas Design District from 6:30 PM – 10:00 PM on Saturday, October 13th.

While the name of the event connotes the focus on fashion, the addition of art has become just as much a part of the night’s experience to celebrate Asian American talent.  This year, President/Founder Tammy Nguyen Lee tasked and worked with Marketing/PR Director Nikki Duong Koenig (who works professionally as the Creative Director of Envision Interactive and is the founder of Cykochik Custom Handbags) with finding a diverse slate of artists who had a unique point of view, strong and thought-provoking work and who represented the spirit of the organization’s mantra of ‘going against the grain.’ Said Koenig, “I’m truly inspired by this amazing group of young visual artists for their talent, passion and generosity to pay it forward.”

Ha Mai (also known as “Fur Face Boy“) was a kid who loved cartoons, comics, toys, video games, quirkiness, art and style, which led to constantly doodling and drawing whenever and wherever. Like many other artists from Asian families, Mai strived to prove to his parents that he could make his career as an artist and to make them proud. Said Mai, “I’m very excited to be a part of an event that recognizes and celebrates Asian-American artists. I’m hoping that my art / design will remind everyone that I’m still very proud of my Vietnamese roots, values and heritage. Growing up in America with American peers and culture can tend to make you forget about your background, but it can also fuse together to create a bigger meaning to art, life and personality. I hope everyone sees that my art represents that I am not just a single-sided Asian or a single-side American, but Asian American.”

From photography to video to performance and sound art, Anh-Thuy Nguyen is a multi-media artist who envelops her work to convey an assortment of feelings and desires. She is a recent MFA graduate of the SMU Meadows School of the Arts. Said Nguyen, “Petite Houses Series is an investigation of miniature houses that I have been working on since 2010. These houses represent one’s dream home, a place full of joy, laughing and love, yet it is just a dream.”

Tam Nguyen comes from a talented family. He is the younger brother of FFAP veteran designer Khanh Nguyen of Nha Khanh. Said Nguyen, “I’m totally grateful for this opportunity to be a part of ATG. Most of all I’m looking forward to checking out all the creative talents. Being around designers and artists at these events can be very energizing and inspiring, especially to fellow creatives like myself. At the moment, I am in love traditional media. I simply paint and draw portraits obsessively.” He will exhibit a stunning portrait piece of his mother, who undoubtedly must be proud her talented son and daughter.

This year, several of ATG’s Artistic Scholarship applicants were visual artists, and two were selected to exhibit pieces as a part of the organization’s mission to support the work of young talent. Finalist Melissa Woodbridge is a sophomore at the University of Georgia, and Scholarship Winner Thoa Nguyen is a freshman at the University of Texas at Austin. Both are pleased with the chance to share their work and attend and their first Fashion for a Passion in person. Woodbridge said, “I am incredibly excited to be apart of this amazing event that involves so many passionate, talented people, and I hope that I will be able to contribute with my own love for art and community.”

Added Nguyen, “It is an honor to be a part of the sea of talented artists featured at the Fashion for a Passion event. Making art has always been such a personal experience for me, so I am grateful for the recognition and the opportunity to share my point of view with other inspirational artists.”

Already starting out at a young age, Ann He of Dallas, TX, calls herself a “full-time nerd” and “a proud Trekkie,” while pursuing being a part-time fashion photographer. She is a senior at Highland Park High School, and remarkably juggles her schedule through cross country, academic decathlon and being a photo student. She has already been featured in several publications, such as Photographer’s Companion (China), Vogue Girl Korea (July 2011) and Elle Girl Korea (January 2011). 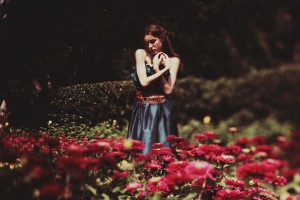 Tickets to Fashion for a Passion range from $50 to $100 and are  on sale exclusively at the FFAP Event Page.  For more press/media information on the event, please contact pr@againstthegrainproductions.com. 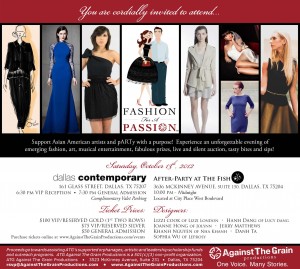 18 year-old Thoa Nguyen was born in Hue, Vietnam.  In 1996, her family (including herself, her parents and older sister) immigrated to America when she was three years-old. After living in Arkansas with her grandparents for six months, the family moved to Arlington, Texas. The family experienced culture shock, but the opportunity to pursue the American Dream was a dream come true.

Although the language barrier was initially an issue, school quickly became one of Thoa’s strengths. She challenged herself, taking advanced classes whenever possible, as well as courses that interested her artistically. After stints in choir, band and theatre, she found her passion for studio art.  She served as Vice President and then President of her school’s National Art Honor Society, Vice President of the National Honor Society, Historian of the Drama Club, was a Project SOAR mentor and part of the International Thespian Society, Environmental Club and Future Business Leaders of America. She recently graduated from Juan Seguin High School ranked number three in her class. Thoa plans to study Radio/Television/Film as well as Studio Art at the University of Texas at Austin.

Born in Hue, Vietnam but I consider my ” hometown” to be Arlington, Texas

What does ‘going against the grain’ mean to you?

To me, ‘going against the grain’ is synonymous to swimming against a current, doing what your heart tells you to do, despite what is expected. By pushing yourself to reach your goals no matter the circumstances or resistance, you are going against that opposing force. We would not be where we are now if minorities throughout history had not conformed and sparked revolutions. Like they say, ‘if there’s a will, there’s a way,’ even against the grain.

How do you go against the grain?

I believe that the most important characteristic to be able to go against the grain would be courage. It takes a lot of courage to STAND UP for your ideals when everyone else is sitting. I’d also have to say that it has taken me my entire life so far to earn that courage. I go against the grain by putting full faith and spirit into what I have realized I want to do for the rest of my life: incorporate my art with my love for film(making). Any person with traditional Asian parents can agree that they want the best for their children’s futures, which means they expect us to be in high paying career like medical or engineering fields. Having come from an immigrant family, I was expected to earn outstanding grades, then pack my bags for medical school. To my parents dismay, I had no interest in such fields… I had my heart set on being an art director for film. Although it may not seem like much, it took me my entire life to figure that out. To stand behind what I was passionate about, even if it was not what was expected of me. To have courage.

On the importance of art to a community: (excerpted from scholarship essay)

“If there were a few imperishable and infinite things in this world, art would be one of them. Art takes so many forms and is perceived by so many perspectives that it can never be nonexistent.  Lucky for us, as human beings, we need it in our world to survive. It is a wonder that something that can be seen as trivial and even unnecessary and impractical, is so embedded into ourselves, we almost forget it is there, if it were not for the people who express it so well. Art is soul, and life, and presence, and void. It is what adds color to our world, our community, and our being.”

What made you decide to pursue a career in film (art direction)?
Film production has always been interesting to me, and I believe that you should pursue a field that provokes your curiosity and interest for it. And with my art skills and creativity as a precursor, I want to associate that with film production to be an art director for film.
What have been some of the challenges you faced/lessons you learned as an Asian American in this field?
It is not a common field for an Asian American (especially an Asian American with traditional parents) to pursue, so the toughest challenge is proving myself based on my passion and skill, not my race, to every one else. Something that I’ve learned is to do what suits me, no matter what any one else says, and do it well to the best of my ability, because it does reflect on my culture and where I come from.
What do you feel is your biggest accomplishment, and why?
My greatest accomplishment would probably be making it in my graduating class’ Top 2 % and being ranked number three. I know how proud that makes my parents and that all the hard work I have put into my studies for the past four years in high school was with that goal in mind.
What’s up next?
The great, scary, life changing experience called ”college” is next for me! I’m so excited to be in a new city, surrounded by the immense creative atmosphere that UT will offer me!
Quote to live by:
”It is every man’s obligation to put back into the world at least the equivalent of what he takes out of it.” – Albert Einstein
Sign (Eastern Animal Sign & Western Zodiac): Rooster/Scorpio
Passionate about: All forms of visual arts; learning
Favorite food: Barbecue chicken!
Can’t live without: My best friend and future roomate, Alexa Harrington
What it means to you to be named the 2012 ATG Artistic Scholarship Winner:
“It means the most to me spiritually. It’s a sign of reassurance that what I am doing will be worth it in the end, because someone out there believes in me.”
To read more about Thoa, visit the  2012 ATG Scholarship Finalist Announcement.