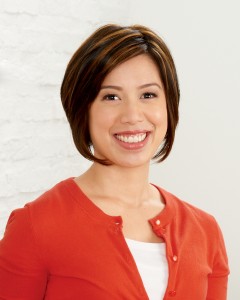 Christine Ha is the first ever blind contestant and Season 3 Winner of the competitive amateur cooking show, MasterChef USA, on FOX with Gordon Ramsay, Graham Elliot and Joe Bastianich. She defeated over 30,000 home cooks across America to secure the coveted MasterChef title, a $250,000 cash prize and a cookbook deal.

“The lady has an extraordinary palate, a palate of incredible finesse. She picks up hot ingredients, touches them and she thinks about this image on the plate. She has the most disciplined execution on a plate that we’ve ever seen. But the palate is where it’s just extraordinary. And honestly, I know chefs with Michelin stars that don’t have palates like hers.”–Chef Gordon Ramsay, MasterChef judge

Christine also has a Master of Fine Arts from University of Houston’s nationally acclaimed Creative Writing Program. During her time there, she served as Fiction Editor for Gulf Coast: A Journal of Literature and Fine Arts and is currently working on a memoir. Christine’s first cookbook, Recipes From My Home Kitchen: Asian and American Comfort Food from the Winner of MasterChef Season 3 on FOX (Rodale), released on May 14, 2013. Since winning, she has made a guest appearance on the inaugural season of MasterChef Vietnam and travels across the country to give inspiring keynote addresses to audiences numbering in the hundreds. Christine lives in Houston, Texas and plans to open establishments both locally and abroad.

Full Name:
Christine Huyen Tran Ha
Hometown:
Los Angeles, California
Current City:
Houston, Texas
Ethnicity:
Vietnamese
What does it mean to you to “Go Against The Grain?”
To follow your dreams in spite of what others tell you.
What made you decide to pursue a career in the food industry?
It’s my passion.
What have been some of the challenges you faced/lessons you learned as an Asian American in this field?
Food is universal—it doesn’t matter what ethnicity, religion, sexual orientation you are or which political ideals you believe in.
What do you feel is your biggest accomplishment, and why?
Attaining the title of MasterChef and a Master of Fine Arts.  Both required a lot of effort and were some of the most challenging encounters I’ve had in my life, thus, some of the most rewarding.
What’s up next?
I will finish writing my memoir and get it published.  I would also love to eventually open my own establishment.  Lastly, I’d like to combine my two gifts and write about food.
Quote to live by: “Be bold.” —Gordon Ramsay to me on “MasterChef” Season 3
Sign (Eastern Animal Sign & Western Zodiac): Sheep/goat and Taurus
Passionate about: Writing, reading, cooking, eating
Favorite food: Sushi, fries, Vietnamese eggrolls, NY-style pizza, southern fried chicken, noodle soup
Can’t live without: Love and empathy