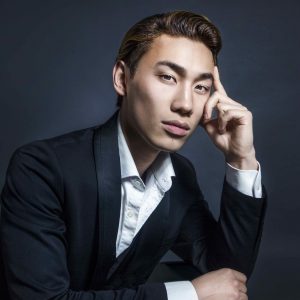 DJiun Wang is Taiwanese American designer and photographer based in New York City. He is currently the Creative Director of Voyce Global and the head designer of Prince & Bond. He has collaborated with some of the most pioneering designers at Parsons School of Design and studied retail strategies at Columbia Business School. His clients have included Tiffany & Co, Carnegie Hall, J Mendel and Lanyu Couture. DJiun’s photography as been featured publications such as Vogue, Elle, Out, and Nylon Magazine. Through his work he aims to challenge, shape and inspire a more innovative world. He was also a 2013 ATG Artistic Scholarship Winner and will be presenting his men’s swimwear and art at ATG’s 9th Annual Fashion for a Passion.

What does it mean to you to “Go Against The Grain”?
At times the grain of life is a smooth current guiding you along, but when challenges arise the grain becomes course and sharp. These are the moments that show true character, strength and ingenuity. ‘Against The Grain’ means to shape your own path with confidence and intention.

What made you decide to pursue a career in this industry?
I have always found solace in the act of creating, whether it was art, music, photography or design. There are so many stories worth capturing and sharing, thus it felt so natural to be in an industry where I can weave these experiences together.

What have been some of the challenges you faced/lessons you learned as an Asian American in this field?
As a first generation Asian American, I sought to find role models who understood the challenges of existing between these two worlds. Growing up with a mixed cultural identity, I sought a role model that could help provide guidance. When there is no one to lead the way, you must become your own trailblazer. It was tough to admit that I at an early age I had to become my own role model by being the first to try, first to fail, and first to learn from mistakes.

What do you feel is your biggest accomplishment and why?
A couple years ago, a student came up to tell me that I was one of their biggest inspirations. I was absolutely overwhelmed with gratitude and at a loss for words, but at the same time thinking, “Of all people, how could I be an inspiration to someone else when I’m still trying to figure it all out?” After reflecting upon that moment, I realized I had become a role model for someone else in a way that I didn’t have when I was growing up. I hope that my work continues to inspire others to become their own trailblazers, in turn inspiring others who need it.

What’s up next?
It has been a great honor and challenge being presented with the opportunity to rebrand and design the future of a tech company. What inspired me to join Voyce was its initiative of providing language services to help refugees around the world, combining my passion for design and humanitarianism. In addition to Voyce, I am developing the next swimwear collection for Prince & Bond and in the process of designing a new cryotherapy in New York City.

Quote to live by:
“The problems of the world cannot possibly be solved by skeptics or cynics whose horizons are limited by the obvious realities. We need men who can dream of things that never were.”
– John F. Kennedy

Passionate about:
Planning my next big adventure, discovering new recipes for a dinner party, connecting with new cultures, and dancing into the night with a martini in hand.

Favorite food:
Any and every Taiwanese street food dish

Can’t live without:
Pen and paper. Without it, too many ideas would go to waste.

We Go Against The Grain #beCAUSE:
We are striving for a better future.