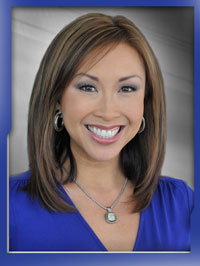 Lily Jang grew up in northwest Houston and feels so blessed to finally be back at work in her hometown. She attended Lowery Elementary, LaBay Jr. High and Langham Creek High School. Lily’s first two jobs were teaching aerobics at Gold’s Gym in Bear Creek and working as a cashier at Randalls off Highway 6.

Lily is a graduate of the University of Texas in Austin with a degree in Broadcast Journalism. She landed her first on-air television news job at KFDA-TV in Amarillo. After a year there, Lily joined WIAT-TV in Birmingham, AL as anchor/reporter. In 2000, she packed her things and moved across the country to the Pacific Northwest to join Northwest Cable News as a night-time anchor. Three years later, Lily moved across the street to anchor mornings at Q13 FOX.  Lily brings to her position significant television experience in reporting and anchoring. She provided continuing coverage of the 2001 Nisqually Earthquake, 9/11, the war in Iraq and the capture of Saddam Hussein.

Lily is an Emmy-nominated journalist who leads the country when it comes to social media interaction with viewers. She is an avid social media user with a loyal following on both Facebook and Twitter. Lily has been honored twice by The Huffington Post as a Twitter Powerhouse. She is a fitness fanatic who enjoys mentoring, traveling the world, trying new cuisines and micro-blogging about her adventures on Facebook. Lily is happy to donate her time and energy to worthy charity causes in the community. On a typical weekend, you’ll find her emceeing a non-profit event in the area, throwing a tweet-up or speaking on a panel about social media. Lily is also fluent in Cantonese and Vietnamese. She began her duties as KHOU 11 News This Morning anchor in late February.

Full Name:
Lily Jang
Hometown:
Houston
Current City:
Houston
Ethnicity:
Chinese/Vietnamese Texan!
What does it mean to you to “Go Against The Grain?”
It means being the voice for the minority. Asian Americans were few and far between in the first two TV markets where I worked. I was proud to put a voice to the silent minority and represent the Asian American community, even to this day in Houston where we have the biggest Asian American population in Texas and one of the biggest Asian American populations in the country.
What made you decide to pursue your career path?
I wanted to be a storyteller, and everyday after 16 years in the business, I still get to do that. I wanted to make sure that Asian Americans were heard and seen and that I would be a role model for younger Asian Americans that we can pursue any career path we want to.
What have been some of the challenges you faced/lessons you learned as an Asian American in this field?
I feel very fortunate because being Asian American early on in my career made me different. I was the first Asian American to work in Amarillo, TX and also Birmingham, AL.  I can’t say I’ve had many struggles because of my ethnicity. I’ve been pretty blessed.
What do you feel is your biggest accomplishment, and why?
My biggest professional accomplishment is coming full circle and working in my hometown where my parents can watch me everyday. But the most important thing about my life is the network of love and friendship I’ve made. I still have best friends from 2nd grade whom I talk to on a daily basis. That’s pretty special!
What’s up next?
I just moved back to Houston in 2012, so I hope to continue to emcee events throughout the community and be someone they can count on to represent them.
Quote to live by: My religion is simple. My religion is kindness. – Dalai Lama
Sign (Eastern Animal Sign & Western Zodiac): Ox and Sagittarius
Passionate about: paying it forward
Favorite food: Korean BBQ
Can’t live without: My iPhone!
Share and Enjoy: