October 13th marked the fourth annual Against the Grain’s Fashion for a Passion event. It was created with the purpose of bringing together emerging Asian American artists, fashion designers and musicians to raise awareness for Asian American culture and arts. The celebration was held at the renowned Dallas Contemporary where its current Inez & Vinoodh photography exhibit served as the perfect backdrop for the lively event. From start to finish, the evening was designed to keep guests interested and entertained. Informal models, donning upcoming designs from the fashion show, mingled throughout the space, offering more information about the designs and designers they were wearing. Prior to the fashion show, guests enjoyed savory bites and cocktails by DC’s Catering, along with a Yogurtland station filled with an assortment of its most popular flavors and toppings. There was a generous variety of silent auction items to meet anyone’s interests, along with a truly unique opportunity to choose from and bid on an ATG t-shirt given to each presenting designer one month prior to the event to recreate into a masterpiece of his or her own styling. 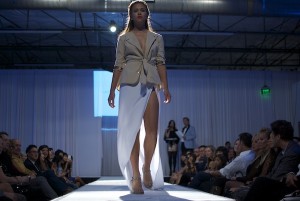 Exhibiting artists included Fur Face Boy, Ann He, Anh- Thuy Nguyen, Tam Nguyen, Thoa Nguyen, and Melissa Woodbridge. Musical entertainers Peter P & Robbie G, iCare and The Plinth gathered guests toward the stage before the runway show. As everyone took their seats, the last band, The Exchange, had event-goers clapping and singing along, anxiously awaiting the start of the show. Introducing and narrating the catwalk was Dallas’ own LeeAnne Locken and Sam Liu. Presenting designers included Lizzi Cook of Lizzi London, Hanh Dang of Lucy Dang, Khanh Nguyen of Nha Khanh, Jerry Matthews, Danh Ta and NYC-based designers Joanne Hong of JOLYNN, and textile designer Sophia Wu of Leprosy. After seeing each designer’s creative lines, a live auction was held over one of each designer’s donated pieces, and things quickly turned competitive with bids getting as high as $1,000 for a single dress. All proceeds from Fashion for a Passion go toward benefitting Against the Grain Production’s supported orphanage outreach programs and ATG’s scholarship funds. After such a well-organized and fulfilling night, it’s hard to believe this event is only four years-old.