I have a friend who lives in Da Nang, my hometown.  We met three years ago through an acquaintance of mine while I visited Da Nang for distributions to the orphanages there.  Hong-Phan is very tall for a Vietnamese woman.  She often gets mistaken for a movie star or a model when she walks on the streets of Da Nang because she is very tall, very pretty and well-dressed.  However, that is not the reason that I want to write about her in this article. I want to talk about her dedication to the cause that ATG has been relentlessly pursuing in support of the orphans, whether they come from the streets, live in orphanages, live by themselves, or live with relatives in remote locations.  Like ATG, Hong-Phan wants to give these children the hope that there are people who care for them, who would come often to comfort and look after them.  Then, these children will be encouraged to try harder to study, so that they can escape the vicious cycle that has life has bestowed upon them.

Even with having a family of her own and also a job that requires a lot of her time and effort, Hong Phan has been instrumental to ATG’s aid activities in Vietnam during the last three years.  With her presence on the ground, ATG has been able to extend its support from the orphanages in the cities to those in remote locations.  We also were able to extend our support to orphans who lost both parents or one parent, but still live with extended families and have exemplary school achievement and good behaviors.

Hong-Phan normally comes to visit the orphanages with a SUV loaded with food and supplies purchased with the funds from ATG.  However, since Phan doesn’t own a car, she normally has to borrow the vehicle from friends or relatives so that ATG doesn’t have to incur transportation costs. 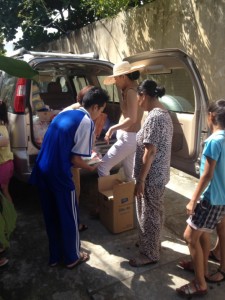 The children from the orphanages have been seeing Hong-Phan often enough that they always break out in a loud cheers when they see her.  They call out “Co Phan den, Co Phan den!” (Auntie Phan is here. Auntie Phan is here!) and rush to the car to help unload the goodies. 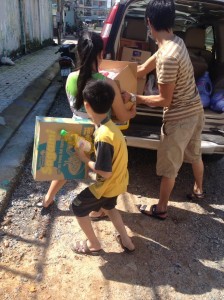 Here you see the children from the House 3 and 4 of  SPC Danang (this center takes street children and raise and trains them until they turn 18) unloading the food and supplies during Hong Phan ‘s visit this past week. 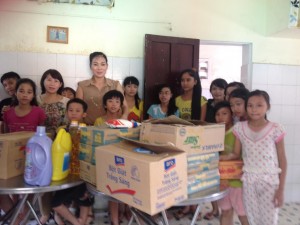 Hong-Phan doesn’t come to visit the children with just food and supplies.  She often thinks of the children’s needs and talks to me about their mental and psychological needs.  She often talks to these children to comfort them and encourages them to do well in school, to care for each other and to continue to keep up their good behavior.  When she visits the orphanages, she goes directly into their kitchen to observe what they eat and would buy things that they didn’t often have, like meat or milk and fill up their refrigerator with those items.

She has also organized to feed the children their favorite hot meals, such as Mi Quang (a specialty noodle dish in the Danag area) and make sure that everyone has received a satisfying portion of these delicious meals.  On her recent visit this month, each of the children had at least two bowls of Mi Quang, to the point that they forgot to leave a bowl for their Guardian Director (they normally remember to do that as a courtesy). 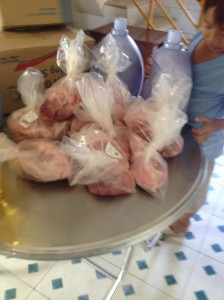 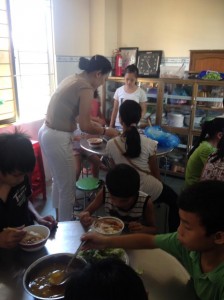 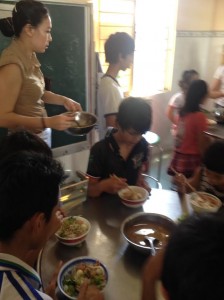 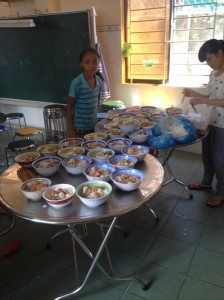 Beside Uu Dam, SPC Danang,  Thanh Tam Center for Disable Children, Redcross Danag, Hoa Khanh Center, Quan Chau orphanage. Hong-Phan also helps us to work with the local school districts and local PTAs in the areas with extreme poverty to identify orphans/children in need and provide them with support from ATG.  Together, we have donated 100 bicycles to those children in Da Nang who are without one or both living parents and in extreme poverty, but have achieved good grades and has demonstrated good behavior.  We also provided scholarships to the orphan students of NTH Highschool.  We are in the process of distributing 20 more bicycles and 100 of warm jackets to the orphans/children in the Huong Thuy District (in the outskirt of the city of Hue.)  Hong Phan works with the local RedCross, local PTA and School Board of the districts to select qualified children to receive the aids.   I, as a member of ATG, also review the list to ensure fairness and appropriation of the selection process.  Together, we want to bring the children the care, love, hope and support that normally would come from their own mothers, now made possible by  ATG via Hong –Phan.  She really cares for these children.

For that, I often called Hong Phan a substitute mother…. 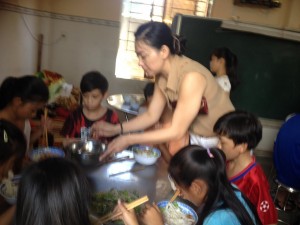