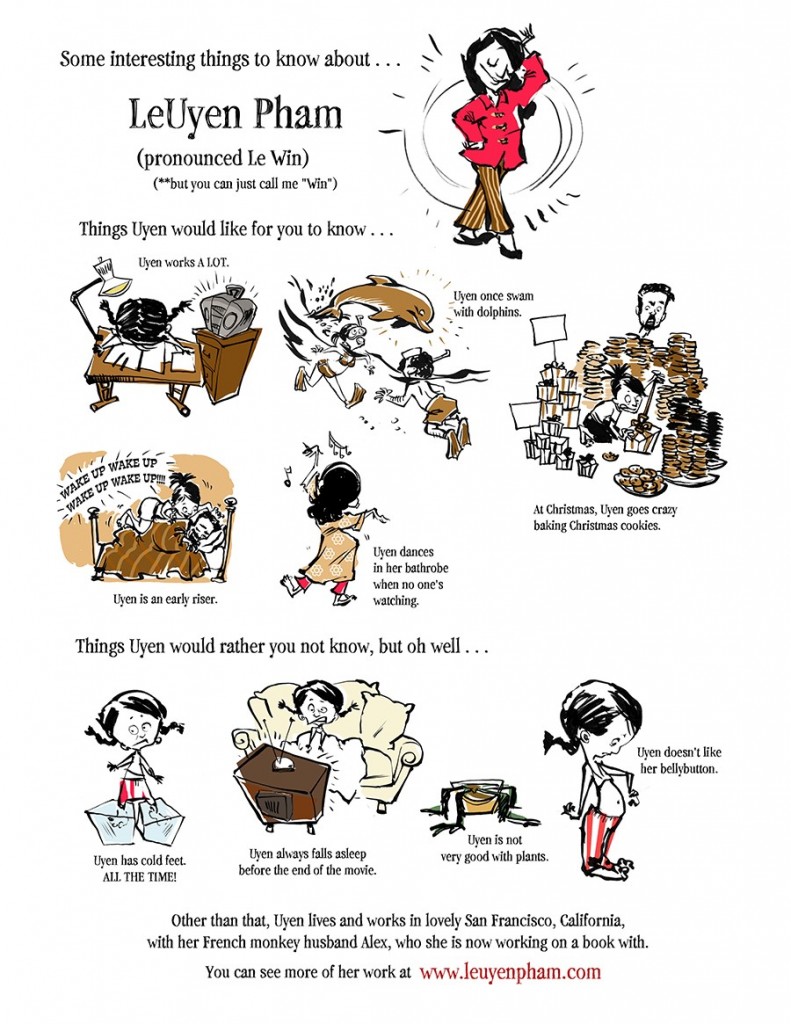 LeUyen Pham is an award-winning author/illustrator of nearly sixty children’s books.  Her books include “God’s Dream,” written by Archbishop Desmond Tutu, the New York Times Bestselling series “Freckleface Strawberry,” written by Julianne Moore, “Grace for President” by Kelly DiPucchio, the Alvin Ho Series by Lenore Look and “The Boy Who Loved Math” by Deborah Heiligman, to name a few.  She also co-illustrated (with her husband Alex Puvilland) the New York Times Bestseller “Templar,” a 450-page graphic novel written by “Prince of Persia” creator Jordan Mechner.  Her books have garnered numerous awards, including the Society of Illustrators Bronze Medal, the Junior Library Guild recipient, Parent’s Magazine, the Oppenheim Toy Portfolio award, among others.  Prior to illustrating books, LeUyen began her career at Dreamworks Feature Animation as a layout artist.  LeUyen lives in San Francisco with her husband and her two adorable young boys, Leo and Adrien.

I have the perfect drawing that answers that question better than I could with words.

What made you decide to pursue a career in the book industry?

I don’t know that I decided to pursue it as much as it pursued me. I’ve loved children’s books and illustrating all my life, but I have to admit as a kid I’d never been encouraged by my parents to be an artist. They were more inclined towards a more traditional field for me. In my family, I have an older sister, two older brothers and a younger brother. We were expected to become (in that order): a doctor, a businessman, a dentist, a lawyer and an engineer. I was told that to become artist would mean confining myself to a life of poverty. Of course, this is understandable that my parents, having come from a war torn country, would want their children to pursue the safest of careers. (Also, let’s admit it, with an arsenal of children like that; my parents would never have to pay for professional services ever again! All I’d have to do would be to marry a mechanic, and they’d be covered for life!) Most of my siblings did pursue those jobs, but somehow, when it came to me, I just didn’t go that way. I went as far as attending UCLA for two years as a political science major, before jumping ship and entering art school. Even there, I was told that one could never make a living as a children’s book illustrator, that it was a side job at best. Somehow, for whatever reason, I didn’t listen. I think I’ve got some sort of internal compass in me that always points me in the way my heart needs me to go. Cornball, I know, to say that, but it’s absolutely true. So here I am, having not listened to anybody, and doing exactly what I thought i could never do. Wait a second, holy cow! I think I just accidentally answered the “going against the grain” question.

Seriously? The BIGGEST challenge is that NOBODY CAN PRONOUNCE MY NAME. I’m not even joking about that! I can’t tell you the number of times I’ve heard my name slaughtered before a presentation. Even some of my closest friends, even editors I’ve known for years, hesitate slightly before introducing me. I think it’s funny, though. And I usually start out any talk to elementary schools or at signings with a proper pronunciation of my name. I even renamed my website to “howdoyoupronounceuyen.com.” I figure, the day any kid can walk into a book store or library and ask for a book by me, and be able to pronounce my name correctly, is the day that I can count myself a success in this field.

Also, publishers who don’t know me who call me are always surprised to hear my voice on the phone. I think they think I’m a man. Which I like to take as close to a compliment, suggesting that my art doesn’t seem more feminine than masculine. But still, if I see another letter addressed to “Mr. LeUyen Pham”, I don’t know what I’ll do…

Other than that, though, I’d have to say that as an Asian American, the publishing field is an extremely welcoming field. I think stories that are not main stream, with culturally diverse characters, are really sought after. So I can’t say I’ve have any complaints!

I don’t think I’ve had any really big accomplishments. I think I’ve had a large number of little accomplishments that have led me to where I am. I can’t say with any certainty that any single event changed my life so much that it propelled me to where i am now. I just kept doing what I was doing, kept moving slowly towards my goals, and lo and behold, I look up and find myself having published over 50 books, happily living the life of an artist and feeling very fulfilled.

Wait a second! Holy cow, I forgot my kids. Do my kids count? They’re pretty big accomplishments! Well, actually, they’re still pretty young, maybe I should wait until they’ve moved out of the house before I can say that.

Oh, brother. What’s NOT up next? I’m one extremely busy illustrator. This year alone I’ve illustrated already 6 books, and I’m not even done yet. Let’s see… I’ve just finished illustrating a book called “Vampirina Ballerina Hosts a Sleepover,” written by Anne Marie Pace. The book is about a Vampire girl who has a sleepover, but is embarrassed to show her friends her home, as she’s, well, a vampire, and her house is appropriately ghoulish. But the little Vampire girl is really me, a little Vietnamese girl, who was also embarrassed to bring over her best friend. When I was ten, my friend came over to my house and wondered at all the “Vietnamese” stuff around — the shrine to my grandparents, the fact we had to take off our shoes — she even saw chicken feet frying in my mom’s pan! I remember being so embarrassed, but now I look back and wish I’d embraced my culture more. So “Vampirina Ballerina” is a way for me to revisit that part of my life, and in the book, this little vampire girl starts out feeling embarrassed, but with the support of her family, and in realizing herself that it’s pretty cool to be different, she gets her friends to embrace her life too. Other projects? Let’s see, I have a couple board books coming out called “Pat-a-Cake” and “All Fall Down” with Candlewick Books, a huge picture book on “The Twelve Days of Christmas,” where all the different characters (maids a milkin’, lords a leapin’, etc) are represented by different ethnicities around the world (and yes, I have a Vietnamese maid a milkin’, in an ao dai, a Thai drummer, a Japanese lady dancing and all manner of all other races — see the accompanying illustration) coming out next year, a book called “The Princess in Black” written by Shannon Hale, about a very pink girly princess by day, monster-fighting super hero girl by night, and then another young reader book written by Lenore Look called “Alvin Ho”, about a young chinese boy living in Massachusetts who is absolutely afraid of everything, but in a very funny way… I also did a New York TImes Bestselling 450 graphic novel with my husband Alex Puvilland (illustrator extraordinaire and the one critic I trust the most) called “Templar,” written by Jordon Mechner. And then on top of all that, I’ve got a bunch of my own stories coming out. “No Such Thing As Little” (the illustration previously shown is one for this book), “Friends” (a story based on my youngest son), another as yet untitled project… the list kind of goes on, I’m exhausted just thinking of it! Here are some sample pieces of some of my projects.

I have MANY quotes, hard to choose one.  So I’ll offer up two:

“It is curious that physical courage should be so common in the world and moral courage so rare.” — Mark Twain

Funny that my biggest heroes are funny old white guys (that’s not a quote, that’s just me commenting on my quote choices).

Everything.  Seriously.  I have boundless energy for all things that I’m even a little interested in.  When I grow old, I won’t die, I’ll just burn out at last.

My mom makes the most awesome cơm gà (chicken rice) in the world.  Like, I dream about it sometimes.  She never makes it for me any more, just for my kids.  Oh, and then sushi.

My husband and kids of course!  Then my ten minutes of alone time in the morning with my coffee and the internet.  And, well, so sad to admit this, but : my iPad, NPR, Netflix, Kindle.  Before you judge, remember that I draw and paint in a studio pretty much by myself most of the time and require some sort of intelligent life form emanating from some source, be it virtual or otherwise.