Jen Kwok is a Renaissance Man who happens to be an Asian girl.  Jen’s sparkling talents take form in writing, singing, comedy and ukulele/piano/glockenspiel playing, and she has performed at venues as varied as Highline Ballroom, Gotham Comedy Club and bawdy basement burlesque shows!

In the mainstream media, Jen’s work has been featured by The New York Times, PBS, CNN, MTV and Rolling Stone Magazine. Jen was also a national finalist in NBC’s Stand-Up for Diversity and will make her feature film debut (as a ukulele player!) in the movie EAT, PRAY, LOVE. 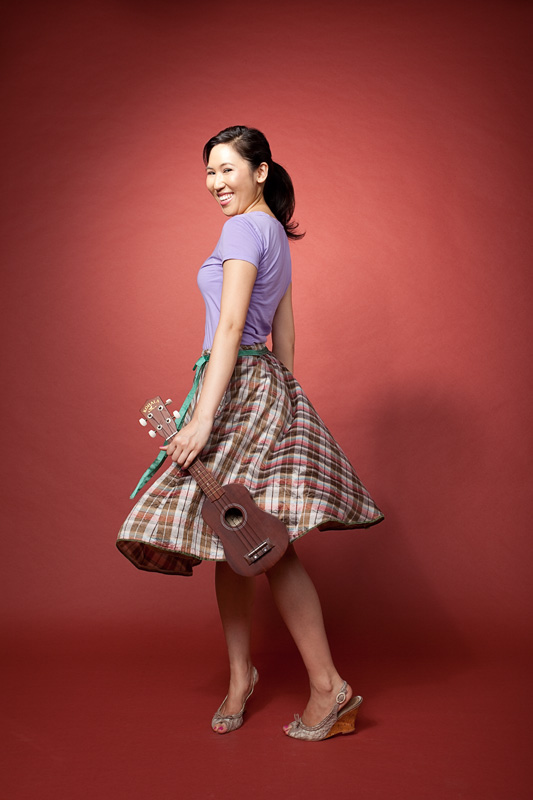 Chinese (my family came to the US from Vietnam)

What does it mean to you to or how do you “Go Against The Grain?”

Going against the grain means not being limited by expectations and doing what you feel is right – even if it’s not the easiest path.  I would go with the grain if I could, but as an Asian-American performer, that’s kind of not an option.

What made you decide to pursue a career in the business?

I completely blanked my third or fourth time doing stand-up, and didn’t go onstage for nearly a year.  Then I picked up the ukulele and found my thing with musical comedy.  I figured that comedy was for me if the awesomeness could somehow outweigh the stage fright, anxiety and nausea.  Plus, I don’t like having regrets.  They suck.

What have been some of the challenges you faced/lessons you learned as an Asian American in a very competitive industry?

It’s hard for anyone to be in the entertainment industry, period.  For Asians and other minorities, we have to deal with the fact that most American film and television roles have been limited to racial stereotypes.  But even in the past year or so, the number of non-stereotypical roles and minorities cast in lead roles has increased.  The industry is changing, even if it’s one Asian/Black/Latino judge on Law & Order at a time.  In terms of overcoming the challenges, writing your own material definitely helps because you can create opportunities for yourself without waiting for somebody to cast you in something.

What do you feel is your biggest accomplishment and why?

My biggest accomplishment was realizing that I wanted to be a writer and performer unconditionally, no matter what.  The industry is tougher than anyone can imagine when they’re first starting out, and for the first few years, I wanted to quit nearly everyday.  It was through sheer tenacity – or madness – that I stuck it out and realized that this life was for me, for better or for worse.  I guess it’s kind of like getting married.  Now I just hope I don’t get divorced.

What do you hope to achieve?

I want to have fun, entertain people and get as good as I can get at whatever it is I’m doing.

Who inspires you and/or who are your biggest influences?

Most Asian female comics would probably not be here without Margaret Cho – myself included.  It literally blew my mind to see an Asian woman on television doing her own material, talking about sex and not being a size 0.  Style-wise, Victor Borge was a huge influence – he was one of the first people I ever saw combining music and comedy.  I also really love Richard Pryor, Dave Chappelle, Tina Fey and Tom Waits.

What is the most important lesson/advice you would give?

Find your own voice and be patient with yourself.  Be more patient than you think you need to be.  Be brutally patient.  And honest.

What’s up next (upcoming projects or plans for the coming months)?

If my ukulele and I don’t end up on the cutting room floor, we will be in the movie EAT, PRAY, LOVE coming out in August!  I’ve also got a new music video hitting the web and (fingers crossed) television very soon.  Other than that, you better believe it’s gonna be a lot of drinking and Facebook.