Dr. Turner wrote, “The Emerging Leader Award recognizes an alumnus or alumna who has graduated within the last fifteen years and has distinguished himself or herself as an emerging leader in a particular discipline, organization, or cause that has brought distinction to the University.” Arlene Manthey, SMU Associate Director of Development for Student Affairs, said, “Tammy was a student leader who made a real impact on not only her peers but others, like me, who had a chance to work with her as a staff advisor.” Continued Manthey, “She has continued to be a bright and shining star using her talents that were honed as a student leader and has become a change agent through the film and entertainment industry. Tammy…is inspirational, visionary, courageous, focused, accomplished, and always willing to step up to the plate and make a difference.”

“This has been an incredible year, full of many personal and professional landmarks and milestones,” said Lee. “It is very validating to be honored by my mentors and peers in this way. What a wonderful gift, especially during a 10- year reunion. I am very humbled and appreciative of those who have helped me along the way.”

Lee was an active student leader and honors graduate from Southern Methodist University’s Meadows School of the Arts in 2000, during which time she was leader with Program Council and East Asian Student Association, voted 1st runner-up Homecoming Queen and served as Miss Asian American Texas from 1999-2001. She has experience as an actress/model, with credits spanning across movies, television, commercials, industrials and national campaigns. After graduating from SMU, Lee received a Master of Fine Arts from the elite UCLA Producers Program in 2004. She has been the recipient of numerous scholarships, leadership and service awards, volunteered with various community organizations and  served on the Board of Directors of Women in Film.Dallas. She is President and Founder of ATG Against The Grain Productions, a nonprofit organization that promotes Asian American cultural awareness through outreach programs and raises money for aid to orphanages in Asia. She currently is the Director of Development for Original Programming at AMS Pictures, one of the largest production companies in the southwest, where she oversees the development of a heavy slate of projects that she has successfully developed and sold to WE tv, HGTV and truTV (Girl Meets Gown, Ma’s Roadhouse). 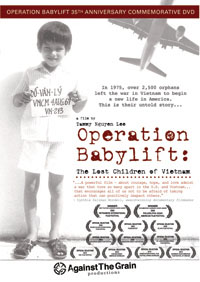 Lee will also speak on a symposium panel for “The Art of Entrepreneurship” at 8 a.m. on Friday, October 22, hosted by the SMU Cinema-Television (CTV) division. Later that day, SMU CTV hosts a free encore community screening of Lee’s award-winning feature documentary Operation Babylift: The Lost Children of Vietnam from 3-5 p.m. in the SMU Owens Arts Center in the Greer Garson Screening Room 3531. Lee’s directorial debut depicts the historic effort that airlifted over 2,500 orphans out of Vietnam during the last days of the Vietnam War and these adoptees’ complex journey to make peace with their controversial past. This year marks the 35th anniversary of Operation Babylift. A Q&A will follow with Lee and two local Babylift adoptees. Finally, Lee will serve as one of the Homecoming Parade dignitaries on Saturday, October 23 and will attend the Homecoming football game as a guest of President Turner.

To attend the SMU Operation Babylift screening, RSVP to trevinot@smu.edu or call 214-768-2129. For more information on ATG Against the Grain Productions, please visit www.AgainstTheGrainproductions.com