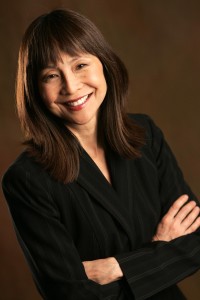 Sylvia Komatsu is executive vice president and chief content officer for KERA/KXT.  She started her career as a reporter and documentary producer covering a wide range of social, political and cultural issues.  She now oversees a content division that includes radio, television, digital media and educational services.  Sylvia conceived and developed the national Emmy Award-winning series, The U.S.-Mexican War (1846-1848).  As executive and series producer, she oversaw this multimedia project, including a companion book, classroom materials and a bilingual website, which received multiple honors.  Among her many national public television credits as program executive are Sweet Tornado: Margo Jones and the American Theater, JFK: Breaking the News, Matisse & Picasso, For A Deaf Son and After Goodbye: An AIDS Story.  A native of Fort Worth, Sylvia is a graduate of HarvardUniversity and the Columbia University Graduate School of Journalism.  She and her husband, George, live in Dallas.

Standing up for what you believe in.  Doing the right thing and staying true to yourself, even if it goes against social conventions.

What made you decide to pursue a career in public television?

I believe passionately in public media’s mission to create content that educates, informs and inspires.

Helping to build a workplace with an incredibly talented team dedicated to excellence and public service.

Passionate about: History, the arts, travel and being outdoors

Favorite food: I love so many different foods it’s hard to single out a favorite. Plus it depends on my mood!

Can’t live without: Family and friends